Summary
Guilds in Tibia: 2689
People in guilds: 219551
Random guild: Soprat Casa
The most guilds: Antica (113)
The least guilds: Visabra (1)
Avg. people in guild: 82
Wars: 2326
Most wars happend on: Vunira (834)
Players online: 9231
Top donator: Osmano
The Exaltation Forge: Is it worth? 17-12-2021 / caducbn
That the new bonuses introduced in Winter Update 2021 are quite interesting is beyond dispute. However, the Exaltation Forge was the target of much criticism by players because of its extremely HIGH cost.

The big question that hangs in the air is: When is it worth investing in it?

To answer this question, we developed an algorithm to simulate 1000x the Fusion process for each classification and tier. In addition, we did a study comparing the average costs when forging using 0, 1 or 2 Exalted Colors to determine if it is worth to use it.


What are the Main Costs?

When forging an item, there are basically 4 costs:

Gold consumed in the Fusion
Sometimes the Fusion attempt don't consume all the resources, and gives back part of the gold or Dust. But as this is a small chance that isn't know yet, we won't consider it for this analysis.


Is it worth using Exalted Cores?

Exalted Cores are used in 2 situations in the forge, 1) to increase the chance of Success by 15% or 2) to reduce the chance of losing the tier/breaking the item on failure by 50%.

For example, it doesn't pay to use any Exalted Cores to forge Classification 1 items. To forge tier 1 of Classification 2 items, if the price of the item is too low, for example Prismatic Armor, it's also not worth it. If the item is expensive, such as Ornate Chestplate, it is worth using.

Forging Classification 3 and 4 items always worth use the Exalted Core to increase the chance of success. Now, if the item is cheap, such as an Embrace of Nature (tier 0), you can neglect the second core. For higher tiers, it's always worth use 2 cores.

I will focus the analysis for Classification 3 and 4 items, which are the most relevant and certainly the most expensive.

All simulations were performed using Improve Success Rate and Reduce Tier Loss (use of 2 Exalted Cores). I considered the average price of 750k gold for the Cores (50 Slivers x 15k each), based on the Venebra market at the time of the analysis.

The field "Perfect Cost" shows the cost of forging if there was NO failure, which is unlikely, but it serves as a reference of what would be the lowest possible cost. 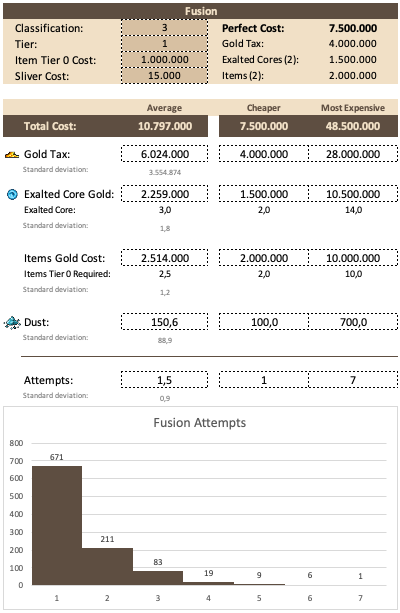 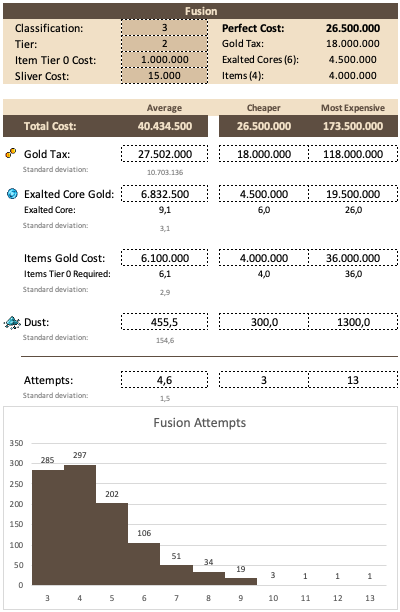 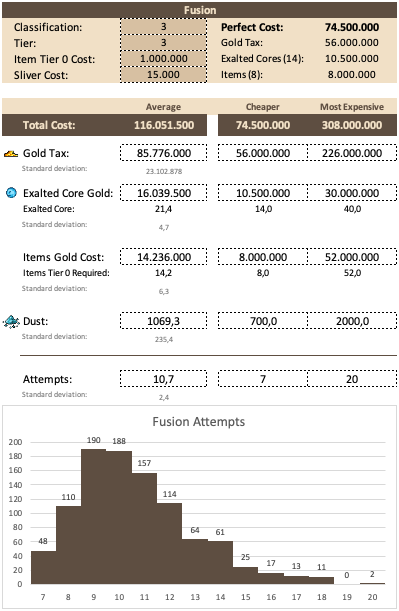 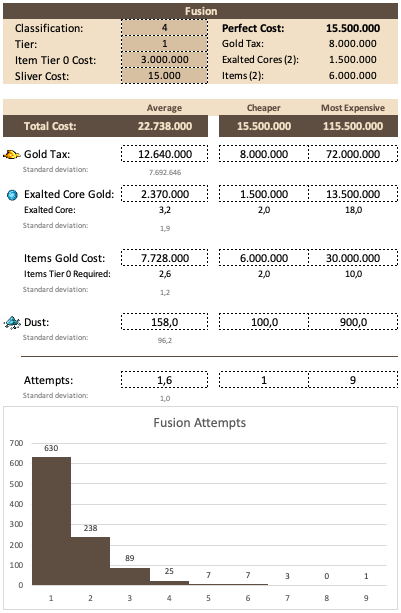 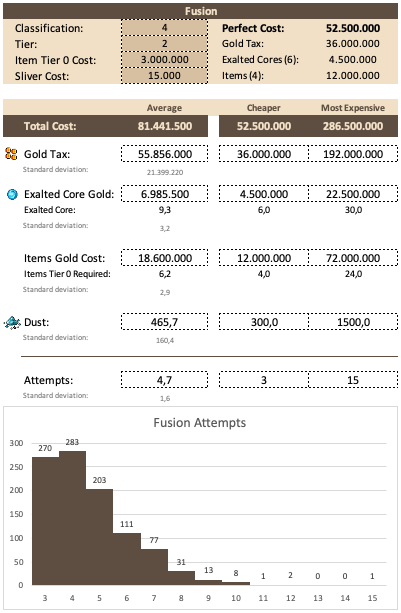 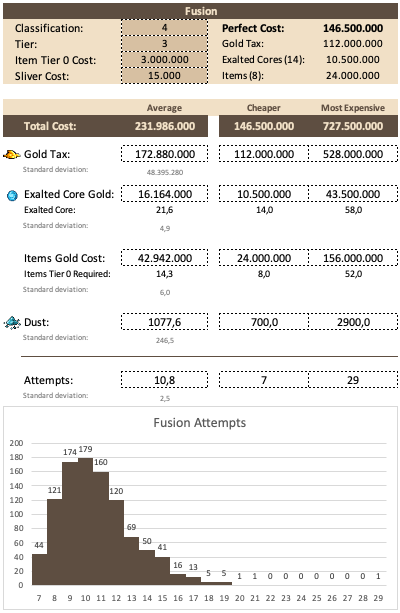 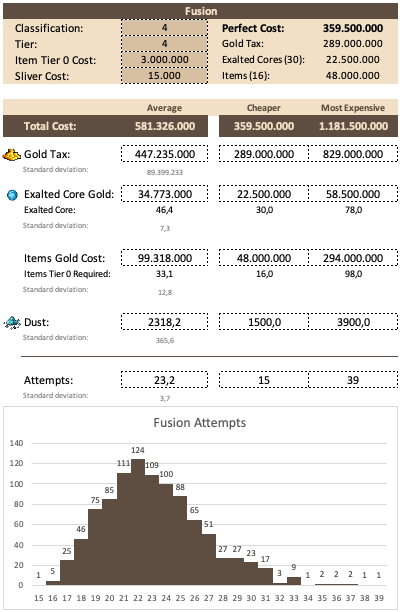 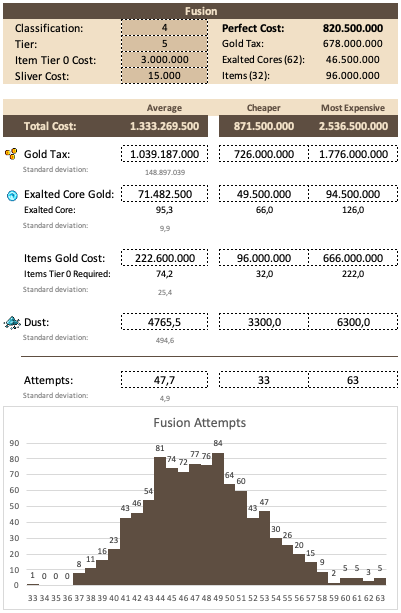 From here, we don't know the exact cost of the Fusion tax, so I'll run the next simulations considering the following gold consumption table: 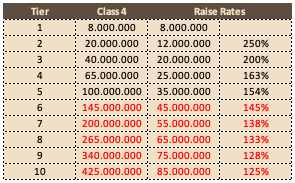 Gold consumed in the Fusion (estimated values in red). 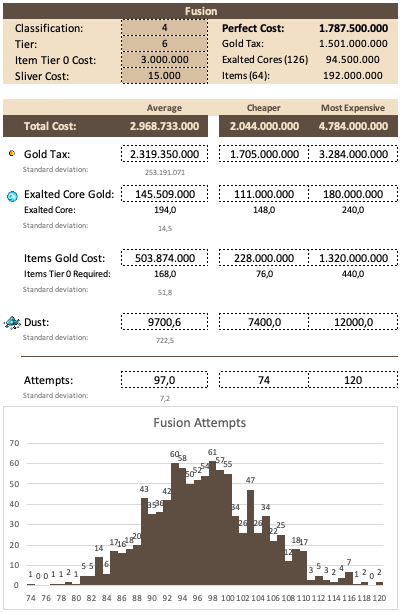 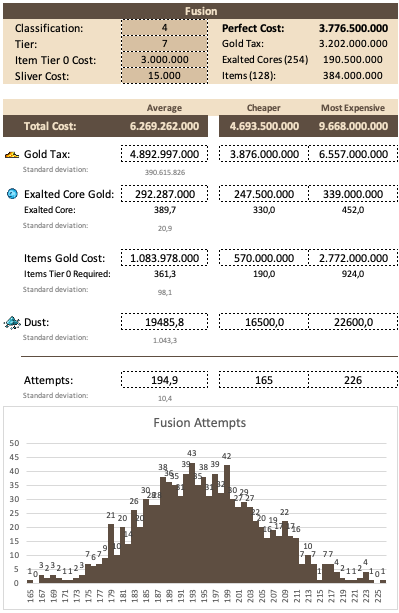 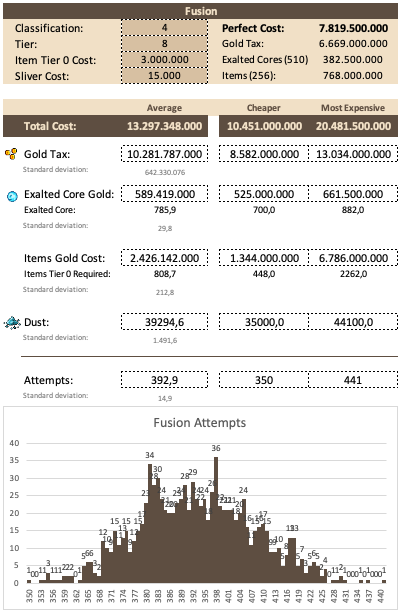 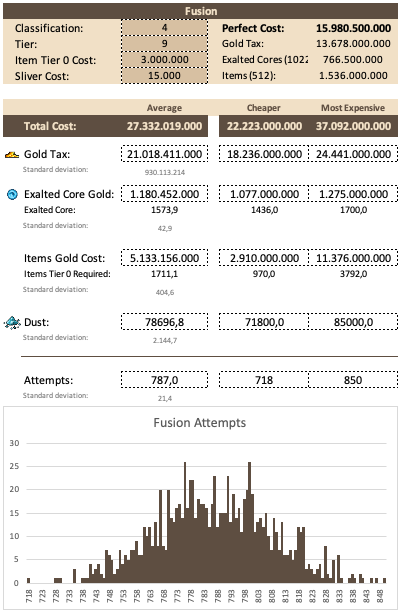 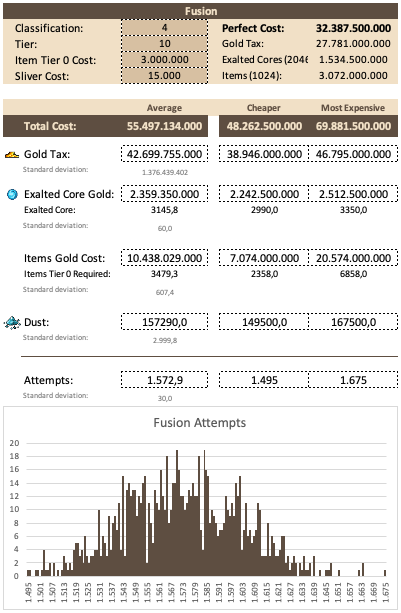 Forging very expensive items directly, such as Soulbleeder, is completely unfeasible given the huge amount of items that are needed in higher tiers. In this case, it is more interesting to forge a cheaper and more available item, and then transfer the tier to the main equipment. 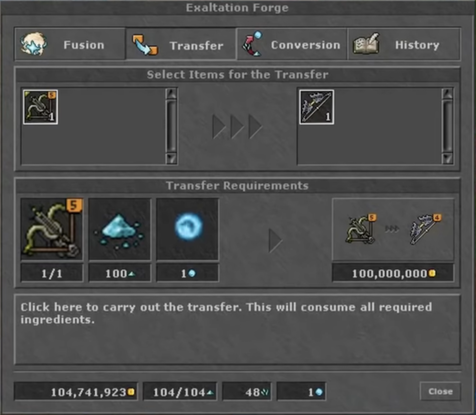 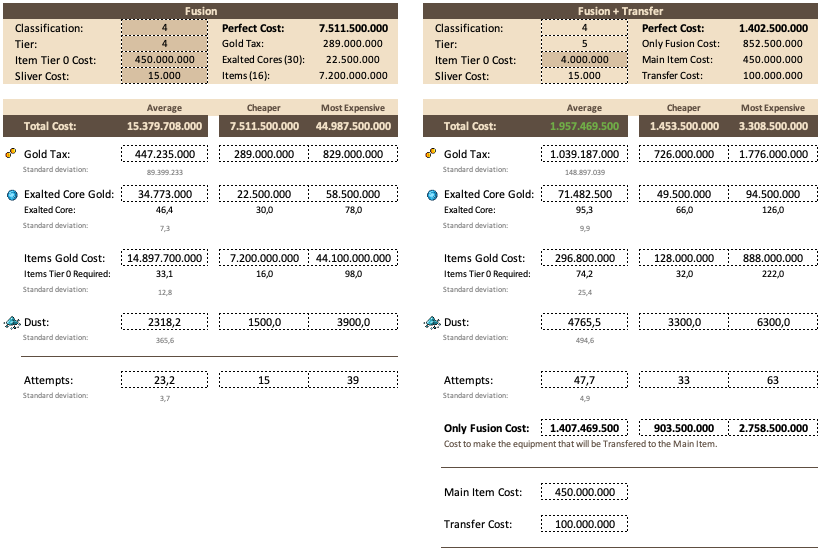 To transfer the tier to the bow you need to spend an additional amount of 100kk gold, plus the main item cost (Soulbleeder at 450kk gold), ending up with a total cost of 1.957kkk gold.

If it were refined directly with Soulbleeders, it would take an average of 33 bows to forge it tier 4, and the final cost (considering each Soulbleeder at 450kk gold) would be around 15.3kkk gold.

It's clear that it's impossible to forge a tier 10 equipment for a few years. Now more important than that is to think: how feasible is it to make an item like this?

Before deciding whether is worth investing in the Forge of Exaltation, you need to compare the costs with other options, such as skill training weapons (which give a permanent bonus to your character's damage, regardless of which weapon you are using). Another option to increase your character's strength is through Exp Boosts, which speed up the level up process (increasing damage, HP, MP, speed and capacity).

After this analysis, you need to decide which of the three effects is most worthwhile for your character. For example, if you hunt full boxed, Ruse (Dodge) can be an excellent option, considering that you will have many chances to activate the effect, even in smaller tiers. If on the other hand, you're a paladin who hunts mostly as a team without double boxing with EK, maybe Momentum would be more interesting as it allows you to use Mas San more often instead of rune (momentum has a good chance of being triggered even in low tiers too).

I confess that of the effects, the one that attracted me the least was Onslaught (Fatal) at that time. While the 60% damage increase is tempting, the chance of it being triggered is very small. In my calculations, it's generally more worth investing in skill training and exp boosts than in it.

I'll quote the example of my character's current situation: to raise my Soulbleeder to tier 3 costs approximately 646kk gold (using some tier 0 item with an average cost of 3kk and transferring later), and that increases my damage by 0.96%.

As my skill is high (Distance 126), spending that same amount to train with Exercise Bows still has a slightly better cost-benefit ratio (outside of the double exp). However, as my level is just average (628), it's much better to boost 2x a day to speed up the level up than making a Soulbleeder tier 3. However, when I get level 1300+, the cost-benefit starts to reverse.

That said, I am convinced that using the Forge is only worthwhile for very strong characters, with high level and skills.

I want to give a special thanks to @Hunter for taking a few minutes to review and give feedback on this article.

The forge is still something new, and we will certainly improve our analysis a lot. If you have more information to contribute, suggestions or questions, please leave your comment. Stay with God, cya!
Comments (2)